ATLANTA, GA — Tonight, Tax March projected “Tax the Rich” onto the Crowne Plaza Hotel in Midtown Atlanta in advance of the Democratic presidential debate happening in the city tomorrow.

“Tomorrow’s presidential debate in Atlanta is the candidates’ opportunity to clearly address the nation’s demand for an economy that works for everyone, not just those at the top. Taxing the rich fuels national and local economic empowerment: It means improved health care and bolstering of crucial government programs — it also means better roads in our neighborhoods and public schools for our children. The benefits of unrigging the tax code ring true for people right here in Atlanta, too. This city is home to some of the richest companies in the world, who raked in billions of dollars last year but thanks to the Trump tax scam, paid far less than their fair share in taxes – some even paid $0 in federal income taxes. Meanwhile, Atlanta has ranked worst in the nation forincome inequality for three of the last five years, and 400,000 Georgians actually saw their taxesincrease last year.

“The Trump tax cuts have exacerbated the growing class divide, and the American people need to hear the presidential candidates’ plans to close the gap. This conversation demands clear answers for the American public, which means debate moderators must responsibly drive that conversation. Moderators must stop pulling questions from right-wing talking points about whether or not taxing the rich will unfairly steal from billionaires who don’t contribute their fair share in taxes. Everyone on tomorrow’s debate stage bears the responsibility to center unrigging the taxcode to empower and invest in working people.

“Candidates: Tax March projected our plan for economic justice tonight. Tomorrow, you must project yours.”

To speak with any of the Tax March spokespeople listed below about taxes and the Atlanta debate, please email [email protected]. 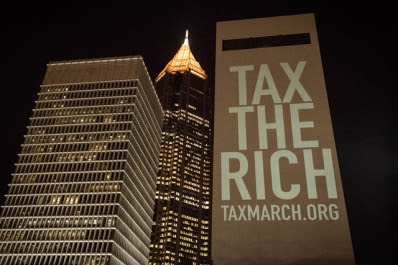 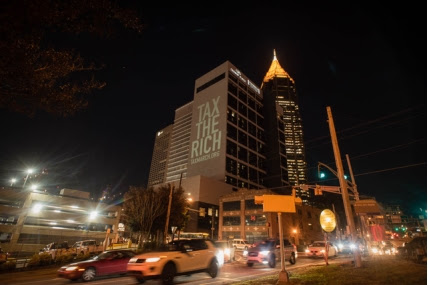